Moody Radio's presence in Freeport, Illinois. dates back to the early 1980s when WDLM-FM in East Moline was rebroadcast on an FM translator. As the FM band became more congested, the station was switched to the more consistent satellite feed on August 23, 1995. Today it broadcasts at 38 watts of power on 90.1 FM to a potential population of 47,711. Northwest Illinois Radio Fellowship is the local support group made up of board members from a couple of Freeport area churches. Park Hills Evangelical Free Church provides the space for our 147 foot broadcast tower.

Freeport has a diverse economic base of manufacturers and insurance companies, most notably Micro Switch, a division of Honeywell. It is also known as the Pretzel City, and its public high school's team is named the Pretzels. The nickname is a reminder of Freeport's ethnic heritage; in the late 1850s, many Germans, both from Pennsylvania and from their European homeland, resettled in Stephenson County. They brought with them their love of pretzel snacks, and a pretzel bakery started up. Additionally, Freeport is known as the site of the crucial Lincoln-Douglas debate, which wrote history for the nation. A monument to the debate stands at the site and was dedicated in 1908 by President Theodore Roosevelt. 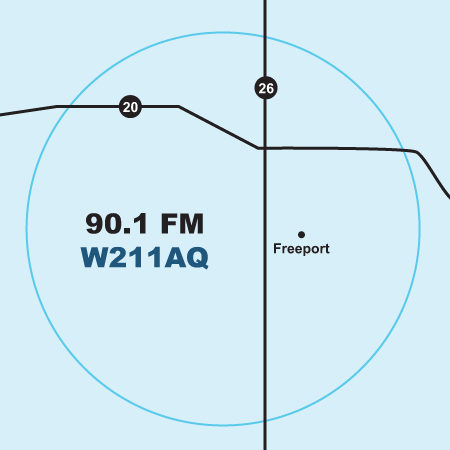 Take Moody Radio or Radio Moody with you wherever you go!